It is known that the protection of human rights became a focus of international law many years before any concern with environmental issues came to States’ political attention. In 1948, soon after the end of the Second World War, the Universal Declaration of Human Rights set up the modern age of international human rights law. Almost 25 years later, the Stockholm Declaration was adopted and, although not entailing any binding obligations, it is often mentioned as the very foundation of the current international framework for environmental protection (Sands, 2003: 30-38).

The purpose of international environmental law

Although these two famous documents were adopted more than two decades apart, human rights law and environmental law have recently been undergoing an increasing and undeniable connection. Observing the latest scientific data regarding climate change, biodiversity and sustainability, it is not hard to conclude that the reason behind this bond can be attributed to the fact that human existence critically depends on a healthy environment (Perrez, 2004: 4-5).

Moreover, these kinds of rights have a very peculiar element in common: they both challenge the traditional concept of sovereignty (Perrez, 2004: pp. 4-5). This happens because the very nature of human rights violations, as well as environmental damages, can often be diffused and trans-individual, which means that human and environmental rights are typically held by indeterminate persons linked by factual circumstances, who are not easily identified individually (Yoshida, 2006: 26).

It must be stressed that when talking specifically about the environment, the transboundary aspect is emphasized because natural regions are normally not restricted by borders. In addition, it is worth mentioning that the right to a healthy environment is generally considered a human right of the third generation in the division proposed in 1979 by the Czech jurist Karel Vasak. This set of rights held by groups of individuals against their respective States is based on the tenet of ‘fraternity’ and constitutes a range of rights that have recently gained considerable acknowledgment in international documents. However, it is very hard to enact them in legally binding agreements because of the sovereignty issues involved (Algan, 2004).

Considering the evolution of international environmental jurisprudence, the illustrious trio of arbitrations Bering Sea Fur Seals (US v the UK, 1893), Trail Smelter (US v Canada, 1941) and Lac Lanoux (France v Spain, 1957) has become famous worldwide for specifically demonstrating that the harmful effects of human activity frequently transcend the jurisdictional boundaries of States. From the late 19th century until the mid-20th century, these cases already pointed to the insufficiency of adopting sustainable measures solely in the domestic sphere, raising questions about how the international legal order should respond to State or private actions that would result in environmental cross-border damages. 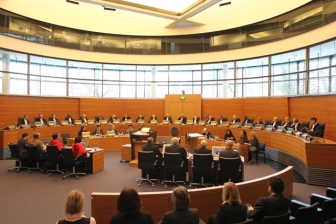 The changes that occurred in the 1970s and 1980s have brought courts and tribunals all over the world to the forefront of environmental protection. As a result, the international community has been witnessing a set of paradigmatic environmental legal cases, whose conclusions are indispensable for a doctrine that also remains in a developmental phase. In the wake of international environmental jurisprudence developments, it is not surprising that the expansion of its normative framework is causing discomfort to those who regard it as a mere set of soft law instruments or comprised only of specific treaty regimes (Boyle, 2007: 370).

The most sensitive environmentalists maintain that the emergence of this new legal framework, as well as the conception of the rights of future generations, is due to the anxiety triggered by the changes that have marked the second half of the 20th century. At that time, the development of science, and its ability to transform the physical characteristics of the planet, reached a level that could hardly have been imagined in the previous century. In addition, the world population has increased at an unprecedented rate, doubling in a few decades. As a result, the demand for natural resources increased significantly and therefore raised awareness of its inevitable scarcity (Kiss, 1996: 19-28).

From there on, the protection of the environment, its biodiversity and resources, has become a common theme throughout the world’s political agendas. Following these transformations, international environmental jurisprudence has also matured. In this sense, it is relevant to mention the precursor role of the International Court of Justice (ICJ), which in 1996, through the Nuclear Weapons advisory opinion, exercised its first major influence on environmental law. Although the case focused on humanitarian issues, the ICJ recognized that there are important environmental factors to be considered in the context of the application of the norms related to armed conflicts.

Other two cases adjudicated by the ICJ are worth noting: Gabcikovo-Nagymaros (Hungary v Slovakia, 1997) and Pulp Mills (Argentina v. Uruguay, 2006). Both cases concerned the use of rivers and the indispensability of environmental impact studies. The first one dealt with a disagreemwnt between Hungary and the former Czechoslovakia regarding the violation of a treaty when Czechoslovakia, ignoring Hungary’s environmental concerns, proceeded with an operation to divert the Danube river. The second case concerned a dispute between Argentina and Uruguay related to the construction of pulp mills on the Uruguay River. Although Uruguay failed to inform Argentina of such operations, the Court ruled that the former did not pollute the river, and that closing the pulp mills would be unjustified.

Another important source of environmental jurisprudence is the World Trade Organization Appellate Body, whose contributions in the Beef Hormones (US v EC, 1997), Shrimp-Turtle (India et al v US, 1998), and Asbestos (Canada v EC, 2001) cases are remarkable. The first one was related to a ban imposed by the European Communities (EC) to the United States’ meat products containing hormonal action. On the other hand, in Shrimp-Turtle the dispute emerged when the US imposed restrictions on import of shrimp products from non-certified countries that do not use a certain type of net containing a ‘turtle excluder device’, which is designed to set free turtles if trapped. Lastly, in Asbestos, Canada requested consultations with the EC concerning the import ban imposed by France on asbestos and products containing it.

With specific regard to the marine environment, apart from Shrimp-Turtle the three major cases of international jurisprudence originate from the International Tribunal for the Law of the Sea (ITLOS): SBT (1999), MOX Plant ( 2001) and Straits of Johor (2003).

The SBT cases emerged from a dispute between Australia, New Zealand and Japan over the conservation measures that should be taken to preserve the Southern Bluefin Tuna stock. Although a severely endangered species, it was of great economic value for these three countries. In the Mox Plant case, the controversy started when the UK’s authorized a new MOX facility in the city of Sellafield, causing great concern to the Irish Government that this would endanger the healthy environment of the Irish Sea. In the final case, Malaysia claimed that the land reclamation around Pulau Tekong and Tuas was causing irreversible damage to the marine environment, aside from serious harm to its sovereign rights.

It is important to highlight that the last two cases concerned Part XII of the United Nations Convention on the Law of the Sea (UNCLOS, 1982), which deals with the protection and preservation of the marine environment. In a different approach, the SBT cases were addressed as a fisheries dispute involving the conservation and management of the living resources of the high seas, therefore related to Section 2, Part VII of UNCLOS, applicable to cases centered on high seas matters. However, the ITLOS has taken a broad view of what is meant by ‘marine environment’, expressing its concerns about the conservation of the living resources of the sea as an inseparable element of the protection of the marine environment; in that sense, its references to the precautionary principle are noteworthy (Boyle, 2007: 372-373).

When considering all the factors discussed above, it is possible to conclude that the interconnection between an ecologically balanced environment and the welfare of human life is now a scientific certainty, and the international legal framework is responding promptly to this conceptual change. Thus, it is extremely relevant to promote academic debates about, and practical applications of, the right to a healthy environment especially at a time marked by exacerbated consumption patterns.

Compared to other fields of law, environmental law is very recent. Our job as legal professionals is to analyze the extent to which its findings are contributing to the improvement of human rights protection, and at the same time to elaborate creative solutions along with the legal frameworks currently in force, paving the way so that the next generations can start from a more consolidated phase of the international environmental legal protection.

Fernanda Barbosa Loss is a lawyer specialized in International Law and Environmental Law. She pursued her education at the Federal University of Rio Grande do Sul—UFRGS (Brazil). She has worked as a legal consultant at the Secretariat of Environment and Sustainable Development of Rio Grande do Sul. Fernanda is currently a member of the Brazilian Institute for the Law of the Sea and of the research group “MERCOSUR, Consumer Law and Globalization” at UFRGS.