This is an updated version of an article first appeared in Italian on Q Code Magazine.

Conflict-related food insecurity and famine are an increasingly pressing concern in contemporary conflicts. Of the various causes, the deliberate starvation of the civilian population and impediment of humanitarian relief from reaching civilians in need are the most critical. Parties to the conflict, particularly in Syria and Yemen, constantly employ sieges and blockades as part of their military efforts. In this respect, the United Nations (UN) Commission of Inquiry on Syria affirmed that:

[o]ver the past five years, the use of siege warfare has affected civilians more than any other tactic employed by the warring parties, and is consistently characterized by denial of the rights to freedom of movement, food, water, education, health care and the right to life (para. 70).

In the face of such brutality, one may rightly wonder what international law says about these methods of warfare, and why the UN Security Council is not taking action to end to these practices. This piece briefly addresses both questions, aiming to provide some food for thought for more in-depth discussion.

Sieges are not per se illegal under international humanitarian law (IHL), namely the rules governing the conduct of hostilities and the protection of civilians in armed conflict. A siege exclusively intended to block supplies to an opposing army or organized armed group remains a lawful method of warfare as long as two basic principles are respected. First: the parties to the conflict must always distinguish between civilians, on the one hand, and combatants and civilians taking direct part in hostilities, on the other hand, and accordingly carry out attack only against the latter (principle of distinction). Second: attacks against military objectives must not cause collateral damage among civilians and civilian objects which is disproportionate in relation to the concrete and direct military advantage anticipated (principle of proportionality). More generally, the parties to the conflict are always requested to take all feasible measures to spare civilians and avoid or minimise collateral damage (principle of precaution).

These principles regulate any military action, including sieges. As a consequence, the parties to the conflict must not impede access of the civilian population to goods indispensable to its survival, or block food, medical and other supplies to the enemy forces whenever this may have disproportionately negative effects on civilians.

Articles 54 of Additional Protocol I and 14 of Additional Protocol II, adopted in 1977 as a supplement to the 1949 Geneva Conventions, specifically prohibit starvation of civilians as a method of warfare. This norm, which is nowadays part of customary international law, is complementary to the rule, included in those same provisions, that forbids to attack, destroy, remove or render useless objects indispensable to the survival of the civilian population such as foodstuffs and drinking water installations. IHL further prescribes a duty to provide rapid and unimpeded passage to impartial and non-discriminatory humanitarian relief for the civilian population in need. The use of starvation, including the impediment to humanitarian relief consignments, qualifies as a war crime under the Rome Statute of the International Criminal Court, customary IHL and the domestic law of certain States (e.g. Germany).

Such kind of actions are also in violation of human rights law, which continues to apply in armed conflict (ICJ Wall opinion, para. 106). In its General Comments, the Committee on Economic, Social and Cultural Rights has clarified that the enjoyment of the rights to food (GC 12, para. 19), health (GC 14, para. 34) and water (GC 15, paras. 21‒22) may be hampered by denial of or limitation to access to essential humanitarian goods. Given that these rights are inherently connected to the right to life, their impairment is likely to entail a violation of the latter as well.

The foregoing shows that international law is clear in forbidding certain methods of warfare. It follows that, at present, a party to the conflict may lay a siege only in very limited circumstances, for example against a locality from which civilians have been evacuated. Most times, sieges against populated areas are in violation of IHL because they unlawfully affect the civilian population. Sea, air and land blockades must also respect the same principles and rules. In particular, it is prohibited to establish a blockade with the purpose of starving the civilian population, or that has a disproportionately negative impact on civilians, or that impedes the adequate provision of humanitarian relief to those in need (San Remo Manual, Rules 102‒104).

The absolute prohibition to starve civilians does not in itself prevent the use of this method in contemporary conflicts. During the siege of Sarajevo (April 1992‒February 1996), the Serbian army and militias cut off all the main supply lines to the city in order to overcome the residents’ will to resist. Since 2007, Israel has established a blockade on Gaza. By controlling the sea and almost all land entry points (the Rafah crossing being under Egypt’s control), Israel has the ability to decide what and when supplies can enter Gaza. UN agencies have reported that obstacles to the import of food, medicines and fuel, coupled with shortage of safe drinking water, is rendering Gaza an uninhabitable territory. As mentioned above, the Syrian regime has constantly besieged rebel-held areas, including Eastern Ghouta and Yarmouk at the outskirts of Damascus, and the cities of Aleppo, Idlib, Homs and Deir Azzor, with a view to re-establishing control over the country.

A less known example concerns the conflict in Yemen. Since March 2015, the Saudi Arabia-led coalition has established a sea, air and land blockade as part of its military efforts against the Houthis. Before the conflict, Yemen used to import between 80 and 90 percent of its food. The current blockade has considerably reduced the entry of food and medicine, as well as the fuel necessary to produce energy for hospitals, water and sewage infrastructures. As the UN High Commissioner for Human Rights affirmed

the powers exercised by the coalition forces along the land borders and coasts and in the airspace, enable the coalition to determine, to a great extent, the conditions of life in Yemen (para. 43).

The Houthis have also besieged a number of cities and localities; they obstructed the delivery of humanitarian relief by delaying distribution, confiscating food and materials as well as detaining, intimidating and torturing humanitarian workers. 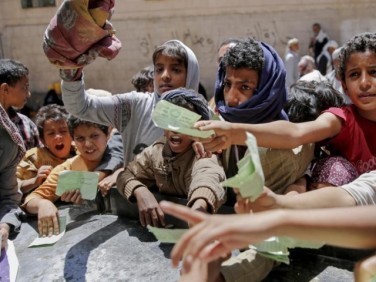 The lack of access to safe drinking water and malnutrition, especially among children, contributed to the outbreak of a cholera epidemic. According to the International Committee of the Red Cross, as of December 2017 the suspected cholera cases reached one million. In November 2017, the Saudi Arabia-led coalition completely closed all entry points to Yemen in retaliation to a missile attack carried out by the Houthis against Ryiadh’s international airport. This marked a critical phase of the conflict and a worsening of the country’s humanitarian situation, prompting a number of UN agencies to jointly call on the coalition to lift the blockade. While by the end of November restrictions have been eased, the blockade remains in place and many essential supplies cannot enter the country. As reported by Amnesty International, with 75 percent of the population in need of humanitarian assistance, the humanitarian crisis in Yemen is one of the largest in the world.

On 24 May 2018, the Security Council adopted Resolution 2417 concerning conflict-related food insecurity and famine. Beside recalling the IHL prohibitions of starvation and denial of access to humanitarian assistance, it expressed its readiness to act against those employing unlawful methods of warfare such as starvation and denial of access to humanitarian relief. While this is a welcome development, some precedents cast doubts on the actual willingness of this organ to take timely action. On 24 March 2018, the Security Council adopted Resolution 2401 on Syria, which called on the parties to the conflict (essentially the Syrian government and Russia) to “immediately lift the sieges of populated areas,” to “allow the delivery of humanitarian assistance” and to “enable the rapid, safe and unhindered evacuation of all civilians” (para. 10). The resolution has remained ineffective and the Syrian regime has continued unabated to impede humanitarian relief from reaching the civilian population, save in exceptional cases. Sieges actually enabled Assad to re-take control of rebel-held areas such as the Eastern Ghouta. As it usually happens, the main cause of inaction was the veto power wielded by the permanent members of the Security Council, in this case Russia.

Unlike in relation to Syria, the UN Security Council has so far failed to adopt a resolution on the humanitarian situation in Yemen. In Resolution 2402, adopted on 26 February 2018 to renew the existing sanctions regime against the Houthis, the Security Council limited itself to express “serious concern at all instances of hindrances to the effective delivery of humanitarian assistance, including limitations on the delivery of vital goods to the civilian population of Yemen”. It did not mention the blockade, though, let alone calling for its lifting.

As mentioned, the Security Council’s failure to act in Syria owes to the threat or use of the veto by Russia, which is also directly involved in the conflict in support of the Assad’s regime. With regard to Yemen, the unwillingness to act is explained by the support to Saudi Arabia and the United Arab Emirates provided by the United States and the United Kingdom, which are among the main exporters of arms and other military technology to the two Gulf countries. The direct stakes of some of the permanent members of the Security Council is thus the reason why this organ has failed to tackle both crises effectively.

It is puzzling, to say the least, that the international community is so inactive in the face of warring parties using starvation as a method of warfare in modern times. The Senior Special Advisor to the UN Special Envoy for Syria, Jan Egeland, has aptly affirmed that “Besiegement […] belongs in the Middle Ages, not in our time”. What is more is that starving civilians is not only a war crime; it may also qualify as the crime against humanity of extermination when it is committed as part of a widespread or systematic attack against the civilian population. Article 7 of the Rome Statute of the International Criminal Court indeed defines extermination as “the intentional inﬂiction of conditions of life, inter alia the deprivation of access to food and medicine, calculated to bring about the destruction of part of a population”.

Beside bluntly condemning the use of starvation in armed conflicts, the Security Council is once again not effectively reacting to the perpetration of international crimes, mainly because some of its permanent members acquiesce to or are accomplices in such crimes. At the same time, the question remains of the way situations like Syria and Yemen should be addressed. Is military intervention possible, given the risk of armed confrontations between major powers such as Russia and the United States and the strict rules on the use of force set by international law? Also, is it a desirable option? So far no one in the international arena can, or seriously wants to, solve such dilemmas. Yet, while these questions keep hanging unanswered, the reality of armed conflict and the horrors it brings along continues unabated, with no end in sight.

Vito Todeschini (PhD, Aarhus University) is co-editor-in-chief of Rights!. He is an Associate Legal Adviser with the International Commission of Jurists, Middle East and North Africa Programme. His research interests lie in international humanitarian law, human rights law and the law on the use of force. The views expressed in this blog are personal and cannot be attributed to the organisation the author belongs to.