While shipmasters have always played a role in search and rescue at sea, the current crisis in the Mediterranean has placed great pressure on the shipping industry. Since the sharp increase in migrants crossing the Mediterranean from North Africa into Europe, which began in 2014, the commercial shipping industry has played a significant role in the search and rescue of migrants.

Search and rescue operations disrupt commercial routes causing time delays and financial costs. They require ill-equipped vessels and crew to care for large numbers of desperate people, creating health risks for the crew. In one example, a bulk carrier crew of 20 rescued more than 500 migrants who had been at sea for three days off the coast of Libya (Reuters 2015).

The important role played by shipping companies in saving lives at sea raises the question: what are the human rights responsibilities of commercial vessels in search and rescue operations?

The responsibilities of commercial vessels in search and rescue operations

Under maritime law there is a clear obligation of search and rescue on the part of shipmasters, an ancient maritime custom codified in the Safety of Life at Sea Convention (SOLAS). Chapter V, Regulation 33(1) of SOLAS requires shipmasters to render assistance to those in distress at sea without regard to their nationality, status or the circumstances in which they are found. Article 98 of the United Nations Convention on the Law of the Sea (UNCLOS) provides that the flag state of any vessel requires the master to render assistance “in so far as he can do so without serious danger to the ship, the crew or the passengers”.

However, legal uncertainty arises in the context of disembarkation, when commercial vessels are completing the rescue of migrants. Under para 1.3.2 of the Annex to the International Convention on Maritime Search and Rescue (SAR Convention) a ‘place of safety’ is where rescue operations are considered to terminate. Maritime law places primary responsibility for disembarkation with the state in whose search and rescue (SAR) zone the rescue takes place. However, the SAR Convention only provides an obligation of coordination and cooperation and not an explicit duty of disembarkation (Mallia 2014).

International human rights law does not directly bind private actors, however there is a robust position (Clapham 2006) that human rights law applies to certain non-state actors in certain situations. A body of soft law gives guidance on the human rights responsibilities of commercial actors. The United Nations Guiding Principles on Human Rights and Business provides that businesses should respect, at a minimum, those rights contained in the Universal Declaration of Human Rights (UDHR), International Covenant on Civil and Political Rights (ICCPR) and the International Covenant on Economic, Social and Cultural Rights (ICESCR). 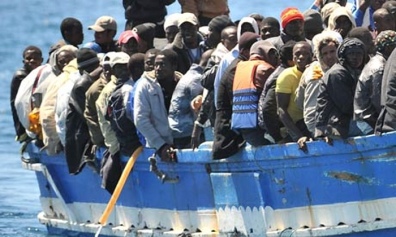 The Guiding Principles are not binding law and only import a negative responsibility – to respect the human rights of migrants rescued. However, once the migrants are on board, commercial vessels arguably have the responsibility to refrain from disembarking them at a place where they face the risk of refoulement, that is, a well-founded fear of persecution or other serious harm. The prohibition against refoulement, the fundamental principle of refugee law (UNHCR 1997), is articulated in Article 33 of the 1951 Convention relating to the Status of Refugees (Refugee Convention) and implicitly encompassed by Article 7 ofthe ICCPR, which has been interpreted as prohibiting the return of persons to places where torture or persecution is feared) (UNHCR 2007).

Other soft law encourages shipmasters to abide by the principle of non-refoulement. The Guidelines on the treatment of persons rescued at sea states vessels should “seek to ensure that survivors are not disembarked to a place where their safety would be further jeopardized”. The Guidelines further provide that non-refoulement should be a ‘consideration’ of the shipmaster.

The disembarkation responsibilities of commercial vessels assumes particular importance in the Mediterranean context, where Libya may be the closest port of return for many rescued migrants. Human Rights Watch has reported commercial vessels returning migrants to Libya. At the state level, returning migrants to Libya has been found to violate the principle of non-refoulementby the European Court of Human Rights in the case of Hirsi Jamaa.

Conclusion: The politics of search and rescue

To some extent, commercial vessels have stepped into a vacuum left by states overwhelmed by the numbers of irregular migrants to provide search and rescue in the Mediterranean. As a result, greater responsibility is falling on shipmasters and their crews for the disembarkation of migrants.

So far, commercial vessels are meeting their search and rescue responsibilities, but they have warned the European Union that further search and rescue efforts on the part of states is essential to avoid “catastrophic loss of life”.

While the search and rescue obligations of commercial vessels are clear, responsibility for the disembarkation of migrants remains muddy.

Nikolas Feith Tan is a PhD fellow in international refugee law at Aarhus University and the Danish Institute for Human Rights. His doctorate looks at state cooperation in the field of migration control. He is currently a visiting scholar at the Melbourne Law School.