Identity, the self-perception of national groups and their relation with new and old minorities residing in Europe have been lately at the heart of the public and mainstream debate on the future of the European Union (EU). The language publicly utilized both by mass media and by National Governments – and too often by European Institutions – created a “new social imaginary” (Castoriadis, L’Institution imaginaire de la société) concerning the relation between different subjects living in the common European space. The conveyed message mainly targeted the increasing presence of people of Muslims faith in Europe and has worryingly shown how the resulting and still existing underlying prejudice of general mistrust toward different religious and ethnic groups could impact the integration process of Muslim communities in Europe nowadays.

Statistics show that the average number of Muslims in the EU consists of about 6% of the population (PEW Research Centre, 2016). Muslims are a highly heterogeneous group, so they should be approached considering their actual communities of origin in order to have a more accurate awareness of how to engage with them when integration issues are at stake. Muslims are a mixed combination of ethnic groups, religious and secular tendencies, and languages. In order to engage with Muslim communities, these differences need to be taken into consideration, as it is not possible to give a standardized and standardizing definition of ‘Muslim community’.

The effort to avoid stereotypical definitions has to be made also as an answer to the emerging trends of discriminatory episodes around Europe. In France, a consistent increase in attacks against Muslims has been registered, while in Germany concerns arose following the adoption of an anti-Muslim manifesto by the far right party Alternative für Deutschland. In this manifesto, Islam is portrayed as not compatible with the Constitution of Germany, a country where about 6% of the population is of Muslim faith. Moreover, in the Special Eurobarometer of the European Parliament – a survey conducted in April 2016 – jihadist terrorism emerged as one of the main fears among EU citizens. Consequently, a new reflection on the relation between security and integration needs to be conceived, especially with regard to the social and political consequences Europe will be, and already is, facing.

This article discusses a number of layered challenges regarding the integration of Muslim communities in the EU. These challenges are exacerbated by the current pushing economic and political factors, which raise concerns for the stability of democratic societies. The analysis aims to outline the current integration process of Muslim communities in the EU and to consider the possibility of developing new shared roots and new identity patterns in our societies.

The protection of the fundamental rights of Muslims in the EU

The adoption of a comprehensive approach in order to achieve an effective integration of Muslims in Europe is essential. The road to integration is fraught with obstacles, mostly due to a deep-rooted feeling of incomprehension of diversity. This negative outcome should not be dismissed, but rather analyzed to better understand the reasons why European Muslims might feel excluded from their place of residence and, more generally, from the democratic paradigm set in European societies (André, Dronkers, 2016: 110). In this respect, an interesting example comes from the condition of European Muslim women, twice discriminated as Muslims and as women (Hashmi, 2005). Direct discrimination based on religious, ethnic and gender grounds occurs in particular in those areas naturally inclined to create social inclusion/exclusion, for example the access to the labor market, where often women wearing headscarf are passed over for jobs or fired. A prejudice based on over-generalization, which has severe implications on one’s daily life, can easily result in frustration and isolation among those experiencing it.

The issue of ethnic and religious discrimination in the EU was reflected in the 2015 Eurobarometer survey. Both ethnic and religious discrimination are perceived to be very widespread. Muslims are generally subject to prejudice; however, there are large differences between EU Member States in terms of social acceptance of different ethnic and religious groups. According to data, 64% of Europeans believe that discrimination based on ethnic origin is widespread and 50% of Europeans believe that discrimination based on religion or beliefs is widespread. On its part, the EU has engaged in tackling discrimination, hate crimes and hate speech in order to strengthen inclusion and integration of Muslim communities. The Equal Treatment Directive (Directive 2000/78/EC), for instance, establishes a general framework for equal treatment in employment and occupation, including conditions for access to employment, selection criteria, recruitment conditions, and working conditions. Thus the directive is certainly a significant starting point in combating discrimination based on religion or belief, disability, age or sexual orientation, all of which may otherwise undermine the achievement of the objectives of the EU Treaties.

Another turning point in the EU’s engagement to create social equality has been the adoption of the Framework Decision on combating certain forms and expressions of racism and xenophobia (Council Framework Decision 2008/913/JHA). The importance of effectively implementing this act has been underlined in 2015, when the first Annual Colloquium on Fundamental Rights in the EU took place. For this first edition, the central theme was: “Tolerance and respect: preventing and combating anti-Semitic and anti-Muslim hatred in Europe”. In the Conclusion paper of the Colloquium, four key actions (empowering education, fighting hate speech, ensuring implementation of hate crimes laws at national level, and promoting diversity) have been devised in order to promoting diversity as well as enforcing and strengthening non-discrimination rules (Annual Colloquium on Fundamental Rights, 2015).

The current global humanitarian crisis of migrants is having a huge impact on the adopted policies and on the public narrative across Europe, also in terms of integration. According to UNHCR data, since the beginning of 2017 about 20.000 migrants already arrived in Europe by sea. The EU does not have fully adopted a harmonized approach to migration and the related integration issues. Consequently, Members States are often asked to find national solutions to respond to social and political demands that should be addressed at the European level. For instance, a Memorandum of Understanding was signed in Italy by the Ministry of Foreign Affairs, the Ministry of Interior and the Community of Sant’Egidio, the Federation of Evangelical Churches in Italy, and the Tavola Valdese (Italian MoU, February 2016). The pilot project is so far a unique case in Europe to address migration flows using existing legal tools. This project will open so-called ‘humanitarian corridors’ to asylum seekers: it envisages the safe arrival in Italy, over a period of two years, of around 1.000 refugees from Lebanon, Morocco and Ethiopia. Such a project will put in place a legal and safe alternative to the borders’ management adopted by the EU. The latter is currently mainly focused on containing the humanitarian emergency through the closure of the external borders and the forced return of individuals to their countries of origin, rather than on long-term sustainable reception policies that would require a full and equal commitment by all Member States (Migrant Humanitarian Corridors Greenlighted in Italy, Mediterranean Hope 2016). 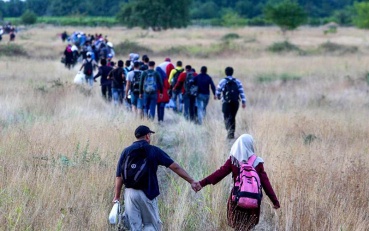 Since most of these migrants are of Islamic faith, the effectiveness of Muslim communities’ integration processes into European societies becomes crucial. In this regard, the 2016 Commission Communication on the integration of third country nationals represents a step forward. As stated in the Communication, European societies are, and will continue to become, increasingly multicultural. Human mobility, to various degrees and for a number of reasons, will be an intrinsic feature of the 21st century for Europe. Therefore, the EU must set up appropriate mechanisms not only to manage migration flows but also to integrate third-country nationals (COM(2016) 377). Failure to promote personal and professional development of third-country nationals in the EU would represent a massive waste of human resources, both for the individuals involved and more generally for the EU’s economy and society as a whole (EEIP/IP033). While a number of legal and policy tools have been adopted, it is also necessary to ensure their full and effective implementation in a timely manner.

Muslims living in Western countries have often encountered integration barriers due to a number of factors including poverty, social marginalization, and discrimination. Notwithstanding the variety of causes, data increasingly show that lack of cultural integration leads to an increased risk of radicalization (Rahimi, Graumans, 2015). While security and counter-terrorism have traditionally remained under the responsibility of Member States, the EU supports and complements actions to tackle terrorism, including most recent jihadist terrorism. Most recent EU policy documents stressed the idea that Europeans need to feel confident that, wherever they move within Europe, their freedom and security are well protected. Comments in this point may be easily found in the EU Agenda on Security presented in April 2015  (COM(2015) 185).

The 2016 Commission Communication on supporting the prevention of radicalization leading to violent extremism highlighted how the recent terrorist attacks in Europe have once again underlined the urgent need to tackle the radicalization leading to violent extremism and terrorism (COM(2016) 379). Integration and the prevention of radicalization are undeniably key parts of the fight against terrorism: recruiters and extremist preachers use ideological and religious factors in order to exploit perceived injustices while abusing religious narratives and symbols for the purpose of acts of violence.

Equality, universal access to public services and institutional accountability are the most effective tools to face radicalization and in-country terrorism. As the former UN Secretary-General stated, “violent extremism undermines peace and security, human rights and sustainable development; it can be tackled only through education, good governance and integration policies” (UNGA A/70/674). At the same time, the EU and Member States are required to find a balance between security and the respect for individual rights and freedoms, since the promotion of fundamental rights and the rule of law are foundational of the EU Treaties and values.

In order to successfully integrate third country nationals and communities with different religious and cultural backgrounds, it seems necessary to recognize diversity, acknowledge that antagonisms exist within complex societies, and understand how to engage with them. It is essential to recognize that Islam is part of Europe, and that the Western world has become a koiné (derived community) of cultures, where minorities, migrants, people coming from different countries have decided to settle in. Independently from their actual community and country of origin, and approach to religion, new and old minorities might be at risk of discrimination, especially when it comes to those sectors on the development of which every individual depends, such as access to work, to housing and to education. When the right to be different is denied, it becomes easy to use religion as a justification for extremism.

The analysis leads to some final considerations based on the fact that it is essential to correctly define existing social actors to create new common roots. First, Muslim communities have been part of European societies long before the humanitarian migration crisis erupted; the latest should not be used as a political justification to discriminate new and old members of our societies. Second, integration processes and coexistence factors cannot be based on the marginalization of diversity only in order to strengthen weak, existing identity paradigms. Indeed, the creation of a common identity does not necessarily entail the act of fighting existing differences between social and political groups, but rather their acknowledgement. Finally, to test and put pressure on cultural identities does not mean to overcome them, rather to renovate them, which is essential in building inclusive societies. Social conflicts are inherent to societies and must be dealt with a view to channeling and transforming them into new social structures, in order for individuals to achieve that expectation of happiness which is, at the end of the day, what everyone is longing for.

Carlotta Giordani (E.MA 2012/2013) holds a degree in Law and European and Transnational Law (LL.B and LL.M Università degli Studi di Trento, Italy). She is a human rights lawyer and activist, specialized in the protection of vulnerable groups, migration and governance. She has worked in Palestine, China, France, Belgium and now she is working in Italy on anti-discrimination issues. Contact: carlottagiordani@gmail.com